Why low-end ‘climate sensitivity’ can now be ruled out 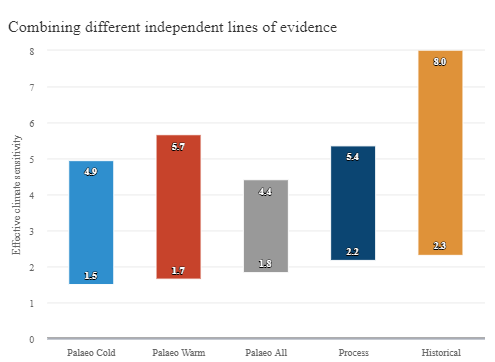 Why low-end ‘climate sensitivity’ can now be ruled out

-Research published in the Reviews of Geophysics, develops the likely range of “equilibrium climate sensitivity” (ECS).

-This is the measure of how much the world can be expected to warm for a doubling of CO2 above pre-industrial levels.

-The findings suggest that the range of ECS is likely to be between 2.6C and 4.1C.

After four years of labour and detailed discussions by an international team of scientists, we are able to quantify better than ever before how the world’s surface temperature responds to increasing CO2 levels.

Our findings, published in Reviews of Geophysics, narrow the likely range in “equilibrium climate sensitivity” (ECS) – a measure of how much the world can be expected to warm for a doubling of CO2 above pre-industrial levels.

Constraining ECS has remained a holy grail in climate science ever since US meteorologist Jules Charney suggested a possible range of 1.5C to 4.5C in his 1979 report. His estimate was largely based on the world’s first two global climate models, which gave different estimates of 2C and 4C when they performed a simple experiment where atmospheric CO2 levels were doubled.

Since then, despite more than 40 years of research, much improved understanding of atmospheric processes, as well as many more detailed observations, this range has stubbornly persisted.